The taps of the best Pilsner pubs are something legendary on the streets of Prague. And few pubs meet the task of serving this golden lager the way it was meant to be. In 2010, U Houbare won the award for Best Pilsner Urquell Pub, a prestigious award which faces stiff competition and the highest of standards. In previous years, U Houbare is usually voted one of 10 best Pilsner pubs in Prague.

Frequented by devout local Pilsner fans, Czech and tourists alike, U Houbare attracts individuals of all ages. Decorated with traditional Czech beer memorbilia, this wooden walled pub has an authentic and charming pub atmosphere. This isn’t the largest pub, with a large entry way where local fans stand and sip their Pilsner, and two other rooms, which one of which is pleasantly non-smoking. In the evenings, U Houbare fills up quickly, so consider making reservations.

These are some of the different beers that U Houbaře had on tap on our visit. 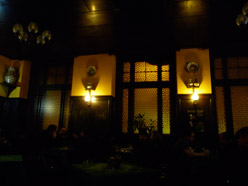