Ascending from Ládví’s underground metro station, we found ourselves in a bustling farmer’s market of Czech veggies and honey, with families, older folks, and those on their way home from work stopping to enjoy the last rays of summer. Occupying the lower corner of Ládví’s Cultural House, Pivovar Cobolis is Prague’s newest microbrewery to find a home among the residential housing (or panelaky as they’re called here) blocks of Prague 8.

Expanding around the lower corner of Ládví’s Cultural House, natural light floods through the floor to ceiling windows on a spacious pale wooden interior, fitted with industrial matte black accents, culminating in a gleaming copper tap system. Tables abound everywhere, with an entrance designed for those grabbing a pint over a newspaper or quick chat. Outdoor seating wraps around the concrete exterior, complete with bike racks. It’s a large space, well designed and conducive to the spontaneously patron.

Cobolis brews a wide range of beers, and so far, they’ve got the necessities of Czech beer culture down well; their 10° and 12° pale lagers are both remarkably full bodied, plus their 12° dark lager has wonderful caramel and coffee notes. At Slunce ve Skle (a famous beer festival held every year in Plzen) this year, they won the prestigious award for best pale lager.

Their ales were also more than just enjoyable, and actually showed proper hop character for their respective styles. We especially liked their 11&degree Nevada ale, with bright citrusy notes, a decently supportive malt body, and low in alcohol make it an all around winner. They also brew a variety of seasonal specialities, including a Bavarian wheat beer, and more adventurous styles such as a blackberry gose, which met with mixed reviews.

As for their menu, they serve a wide range of food, from everything like Czech classics such as goulash and svíčková (beef in a sweet and sour cream sauce with dumplings) to burgers and pasta. We thought the food was good; we tried a burger, which was juicy, had some nice toppings, and the good kinda sloppy, and goulash, which had nice cuts of tender beef in a rich sauce and fluffy dumplings. Prices are less than in the center, and the food is obviously a much higher quality.

Always ready to remove an almost empty glass or take your order, service was quick. However, one gets the impression that they are not so hospitable towards non-Czechs; they seemed very standoffish and curt towards us, even when we ordered in Czech.

Founded at the turn of 2017 and 2018, Pivovar Cobolis now occupies the space of a former Gambrinus old school ‘pivnice’ or pub, giving residents much needed choice. From the eyes of an outsider, it’s as if so much of the past 50 years of Czech history could be summarized with a quick glance of the eye; a grey brutish building, symbolizing grandiose ideas with a lack of human compassion, a microbrewery designed in the cold, boring, and minimal modern Czech style that is so common in gentrified spaces, and farmer’s market vendors, selling their goods the old way. Very few metro stations in Prague can boast such a testament to modern Czech history.

Despite the service, a visit to Cobolis is well worth your time, not just for the beer, but also for the modern historical perspective. Take the red (or C) line to metro station Ládví, and you can’t miss it.

These are some of the different beers that Cobolis had on tap on our visit. 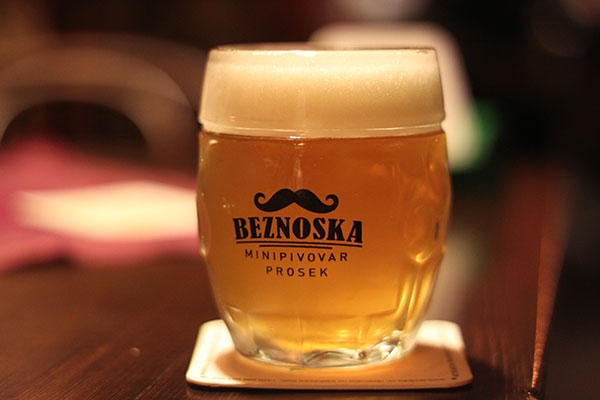