On Husova street in the heart of Prague's old town, is Pivovar U Tří Růží, one of the newest microbreweries on the steadily progressive Czech beer scene.

With roots going back to the 14th century, and newly operating since spring of 2012, this Czech pub offers visitors not only a fine pivo, but delicious, traditional Czech food with a gourmet touch.

Brewing a mix of traditional Czech beers and some fine ales, Pivovar U Tří Růží has on tap 6 beers, which always including their světlý ležák (light lager), polotmavý (amber), and černý (dark). The other 3 taps offer whatever beers have been freshly brewed, and are available until the last drop is gone. We preferred their světlý ležák over their polotmavý, and would recommend giving any of their ales or special beers a shot.

Their menu includes Czech delicacies such as duck livers cooked in wine, wild game ragout, confit duck legs, svíčková (beef in a creamy, slightly sweet sauce), and one hefty burger. The food is well cooked, filling, and offers guests a chance to try some more unique Czech dishes with a gourmet touch. Prices are fair especially when considering the quality and location. U Tří Růží is a great alternative to those tired of the heavy, monotonous traditional cuisine.

With enthusiastic drinkers of all shapes, sizes, and nationalities, U Tří Růží is popular among locals and tourists alike, so it’s not a bad idea to make a reservation. Happily, this is also a non-smoking pub.

Over the course of many visits, we’ve noticed the staff becoming increasingly unpleasant and witnessed some down-right rude behavior to other guests. The staff are unwelcoming and careless, shocked at the request of separate checks, obsessed with getting exact change, and on top of this poor behavior, harass guests for a tip. We’ve also noticed that the quality of the food has deteriorated significantly since U Tří Růží’s opening. So be prepared.

These are some of the different beers that U Tří Růží had on tap on our visit. 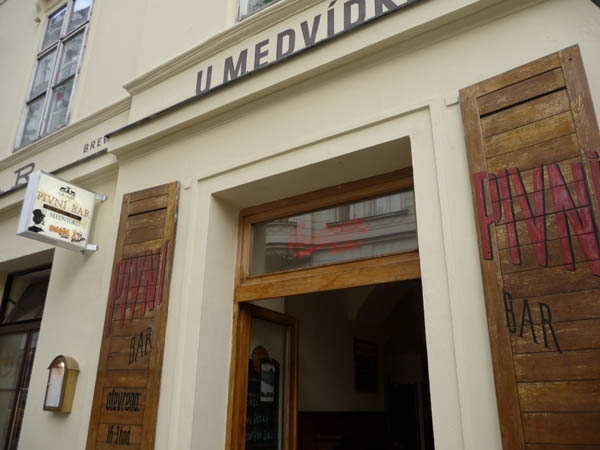