Smichov has a reputation of being a good-beer wasteland, with good reason. Having only a handful of good pubs, BeerTime provides a welcomed oasis, yet leaves this district still wanting more.

Smichov is a district dominated by the Staropramen brewery, which is among the bottom of the barrel (pun intended) of Czech macro lagers, albeit internationally renowned – for some reason. The brewery’s smokestack jabs the skyline and the smell of beer can be picked up across the river. This swath of the city boasts a large number of dive bars and pubs that tap this atrocity, with few places for thirst-quenching respite.

Opening in 2017, the relatively new BeerTime is oddly arranged, existing across the street from the Anděl tram/metro stop, through the passage and into a smaller building in the “courtyard”. The pub’s exterior woodwork, reminiscent of old German taverns and brauereien, is gorgeous; it stands out incredibly against the backdrop of Anděl’s modern steel and glass buildings just beyond the passage leading this pub. However, it is upon entering Beer Time that things become more confusing.

Once inside Beer Time one is greeted by a large bar with 13 taps, quite a sight for sore eyes in these lands. However, as soon as you have a look around, take in your surroundings, you’ll quickly realise that BeerTime has the look and feel of a hyper-conventional pub. To be outright, there is nothing incredible or wholesome about it, but it is perfectly acceptable, especially considering its location. In my opinion this bar is an anomaly, yet not entirely in a good way.
The surroundings clash with its exterior (much welcomed) but the interior clashes with the exterior (quite unwelcomed), from the exterior I expected something cosy and homely inside.

I wish I could say that this was purely aesthetic, but the timbre, or the feeling, of the pub was incongruous. The atmosphere was contrived and the taplist uncurated. The beer list was not bad at all, offering a rotating selection including (but not limited to) Únětice, Raven, Břevnov, Zichovec and Zhůřák; upon my visit about half of the taps were an American-style ale of some sort (fine, that’s common nowadays), but of the 13 taps I was only drawn to taste a couple of the beers listed: an amber lager from a favourite brewery of mine, Únětice, altered slightly by adding Jameson-infused oak flavour (nope!), and the other being the bar’s own BeerTime single-hop Mosaic session IPA, too astringent and thin for me. I was debating staying for one more (not something that should happen in a pub), when disaster struck…the music.

The music brought out all of the problems I had with this place – Avril Lavigne is not pub music, in fact, it’s just bad. The generic traits of this pub made it seem as though I was in some upper-middle class resort town in the U.S., completely passé. The waitstaff was attentive, smiling, nice and the beers did arrive in decent time, but despite the rotating selection I thought the list could use some more thought and diversity. The overall atmosphere lacked character and energy (although, it was a slow time of the day), affecting the mood more than the beer; put simply, I couldn’t be bothered to stay and have another.

This bar could exist in nearly any city, in almost any country. It is not unwelcomed, but I’m still left wanting more from Smichov. BeerTime is very far from being a bad bar, and if I was in the area and craving a pint, I’d stop here, but I wouldn’t go out of my way to pop in.

These are some of the different beers that BeerTime had on tap on our visit. 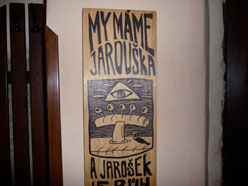 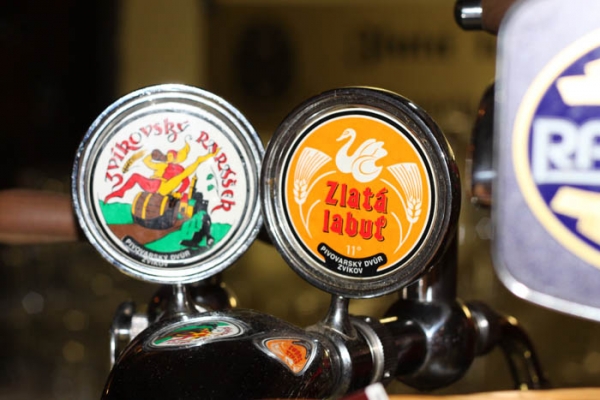