As the beer scene in Prague evolves and brewers are getting more creative with not only the style that they brew but also with their ingredients, there’s a lot more in our glass than just what, well, hits our taste buds. We’ve sat down with Olga and Ruslan of Beer Geek and Sibeeria, a couple who’s been at the heart of Prague’s growing craft scene, for a chat about beer’s past, present, and future.

What strikes us as most impressive about Olga and Ruslan is not how cool their bar and bottle shop is, or how much we love Sibeeria’s brews, but their ambition and ability to build something from scratch. To call them hard-workers is well, a vast understatement. Along with their friend Roman, they’ve built a beer empire with their own two hands and have continually been one step ahead of the game, diversifying from bottle shop to pub to flying brewery and now, finally, digging deeper roots and establishing their own brick and mortar brewery.

No doubt a beer that’s caught your eye on the shelves of craft beer shops or the taps of a multi-tap pub within the past year, Sibeeria has an impressive and intriguing selection of beers. Originally named Beer Lab, Sibeeria was founded with the idea of being more of an experimental brewery, creating unique beer styles rare to the current Prague beer shop shelf.

Their first beer was a Berliner Weisse, a collaborative brew with Raven, which received mixed reviews. After realizing that Beer Lab was a registered trademark of a Polish brewery, they began the difficult task of renaming their project, finally whittling down their over 100 name list to Sibeeria.

Sibeeria has brewed over 10 different beers, operating as a flying brewery and creating adventurous beer styles, often the product of collaborative brewing projects. We love their sour weizenbock Ikaros, which was brewed in collaboration with Freigiest, a German brewer whose specialty is recreating obscure German beer styles. Lollihop, the only beer they continually have on offer, is a bright, refreshing, and authentic west-coast style IPA. Their current brewing home is with the talented folks of Zichovec in the small town of Louny, just west of Prague. Soon they’ll be bottling their 11% abv Barley Wine ‘Zima’, perfect for adding some warmth in the dead of winter.

Now, the Beer Geek team has established a new stone and concrete brewery, located in Prague’s industrial district of Vysočany, under the name of PowerBrew. Sibeeria will have a home here; but as with all Beer Geek projects, PowerBrew has a new direction and aim. The goal of PowerBrew is also to house other flying brewery operations, giving them space to brew, plus the technological and scientific resources for improvement and innovation.

The life of a small brewer is not as glorious as it might seem; they face many hardships and obstacles from the very first concepts of a beer to the final product that’s poured into our glass. Ruslan points out that capacity is one of the biggest problems facing small brewers. Most microbreweries, within months of opening, are operating at full capacity and don’t have extra space to rent for flying operations or to even use for experimental brews, thanks to the continuous demand of beer and the staggering goal of financial survival. Therefore, to remedy this, PowerBrew is going to be a large enough space to house not only Sibeeria, but other flying operations, and more importantly with room for expansion.

Another hurdle to overcome is pricing, Olga explains. The small brewer here has to compete with monsters like Staropramen, and therefore has to sell their beer at a cheaper price in hopes of snagging the thirsty average joes. This cheap price, while it benefits us average joes and the more curious drinker, it doesn’t allow for investment in new technology or educational support for brewers.

The ideas that form the foundation of PowerBrew are the result of Ruslan, Olga, and Roman’s formative experiences operating their Beer Geek bottle shop and multi-tap pub; they fully understand how inconsistency and quality are common problems for brewers (and drinkers) here in the Czech Republic.

The Czech Republic is a country that is steeped in brewing tradition, and within the first sentence of any conversation with a brewer, tradition is most likely mentioned. Tradition has many benefits. It’s why lagers here are so extraordinary and the benefits are likewise tasted at the other end of the spectrum; the worst beer here is, well, far better than the worst beer in any other country. Ruslan, while appreciative of these old school ways, has a more forward thinking vision for where he wants PowerBrew to go. Siting how many inventions we use in our everyday lives which all came from a brewer’s ability to innovate, Ruslan wants PowerBrew to be at the front of technology.

We continually use inventions that at their very beginning came from a brewer’s unfulfilled need and the scientific innovation to create a tool for better brewing practices. Refrigeration, germ theory, pasteurization, mercury based thermometers, and the pH scale are all things that were invented either by brewers or by scientists employed in breweries for the betterment of beer.

Even our desire to settle and dwell in one place is commonly regarded by anthropologists as being connected to our ancient ancestor’s need to grow and harvest barley for brewing. In ancient Egypt, beer was used as one of the first recorded currencies. Ruslan explains that what has happened in today’s world of choice and diversity in our craft beer selection has left little room in a brewer’s tight budget of time and finances for scientific investment.

Brewing is set to start at PowerBrew in 2018, with a promise of a wide range of exciting new beers, collaborative brewing projects, and scientific resources for brewers. We’ll be looking forward to what comes next, either in bottles, from taps, or in the way of innovation. 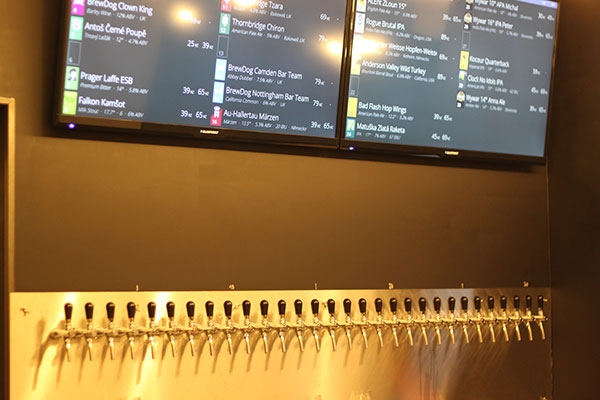