As Czech beer is known the world over, the Czech Republic is also building a reputation for offering one of the best ways to relax- beer spas. Pioneering the beer spa culture, Chodovar is large brewery complex, located on the Western edge of the Czech Republic, in an area famous for its mineral water. Including Hotel U Sládka, Pravá Pivní Lázně, and two restaurants, Stará Sladovna and Ve Skále, Chodovar is an impressive complex in the charming, sleepy village of Chodová Planá in the Western hills of the Cheb region.

On our trip, we chose the ‘Relax I’ package, which seems to be quite popular. This package included 2 nights in Hotel U Sládka , one beer bath for two people (20 minutes), a partial massage (20 minutes), a hot grain pack (20 minutes), two meals each in Restaurant Stará Sladovna, a brewery tour, and a welcome present.

The beer bath was definitely the best part. Individual or tubs for two are available. Once we entered, a kind woman instructed us to take our shoes off, and to change clothes, and wrap ourselves in a white sheet. Then, we hopped into our bath, which was a mix of hot mineral water, beer, and some grains from the beer fermentation process. They also gave us a small beer to sip in our bath. Not only was this extremely relaxing, but beer baths are also beneficial for your skin. Also, be sure not to shower after…depending on when your bath is, the ladies will tell you not to shower till a certain time. Don’t worry- you won’t smell like beer, and to get the most out of your bath for your skin, follow their instructions.

After your beer bath, you’ll be escorted to a ‘relax room’, where you rest on lounge chairs, and are wrapped up in blankets. This is supposed to help your skin absorb all the nutrients from the bath, as well as help you relax.

The partial massages were great- clearly, we had very experienced masseurs. The hot grains pack, which uses grains from the early stages of the fermentation process, was the least enjoyable of the treatments, but still done professionally.

Chodovar’s brewery has a long and rich history. The oldest written document that tells of Chodovar’s beginning is in 1573, but a brewery existed before this. Long ago in the 12th century, there was a small, local castle, and the dwellers of this castle carved cellars in the granite rock for beer brewing. As the legend goes, a labrador dog named Albi found a spring with fresh mineral water, and this water was then used by the castle residents to brew beer. These ancient cellars, carved in the granite rock beneath the brewery, are still used today.

In 1322 the Cheb region, which includes today’s town of Chodová Planá, was annexed to the Czech kingdom. As the little castle lost importance, it gradually fell to ruin. Fortunately this rocky area proved to be inspirational to brewers and the aristocratic family Sliks started a brewery here in 1573.

The year after the devastating fire, Earl Berchem, the owner at that time, rebuilt the brewery on top of the original rock cellars. The highest production recorded was in 1925, with 61,783 hectoliters. Even at that time, Chodovar was popular among local restaurants and inns. This amount was not exceeded till the 1960s.

The history of the brewery became almost forgotten in the period after the Second World War, and the original emblem, including Albi the dog, was replaced with the emblem of the town of Chodová Planá.

Since 1992, Chodovar has been owned by a group of four men, 3 of which share the same last name, Plevka. Taking an active role in running the brewery, the Plevka family reintroduced Albi to Chodovar’s emblem in 2000. Every year, Chodovar produces about 90 thousand hectoliters of beer plus their special mineral water. They also have their own malt house, which is quite important to their brewing process, and which makes about 1,700 tons of malted barley.

Today, Chodovar not only is a brewery, but also a leading beer spa. The brewery is also located on the edge of Slavkovský Les, a beautiful nature reserve that is perfect for hiking and cycling. There are also quite a few events in the summer, including a beer festival and the European championships for oak barrel rolling.

Brewery tours are available, and quite frequently. This tour is in German, Czech, and possibly English. However, the tour is quite general, and not that detailed about the brewing process. If you can only go on a German or Czech tour, they do have a paper in English that is basically word for word what is said on the beer tour. At the end of your tour, everyone gets a glass of freshly brewed beer.

Chodovar Brewery offers a variety of beer for you to try on your trip- no doubt you’ll have enough tasting to do to occupy your time. At each restaurant, a light, dark, and their 13° special is on tap, and at Stará Sladovna, there are usually a few more to try. One consistent factor we noticed in all Chodovar beer was the mineral water- you can really taste the freshness and high quality of the water in your beer.

Hotel U Sládka is a large hotel, centrally located in the tiny town of Chodová Planá. Rooms are simple, clean, and have everything you need for your trip.  All rooms come with a fridge, which is stocked with beer and mineral water, all of which are very affordable. There is either a shower or bath, and TV with standard Czech channels as well as quite a few German stations.

Hotel U Sládka is one of the many buildings that make up Chodovar Brewery, which is a large part of the town. On the first floor, inside Hotel U Sládka, is the reception, a large breakfast room, the massage room, and the entrance to the beer spa, Pravá Pivní Lázně. If you order a ‘hot grains pack’, you’ll venture to one part of the basement. While in another part of the basement, also directly connected to the hotel, is the beer spa. In the court yard of the hotel and Stará Sladovna is a nice garden.

It’s a great advantage to speak either Czech or German, when staying at Hotel U Sladka, as most of the reception staff don’t speak much English. Also, during our visit, the staff that did speak English were more confusing than helpful many times.

There are two excellent restaurants on the grounds of Chodovar Brewery. Both offer similar menus of hearty Czech cuisine, as well as a few international dishes. This is some top class Czech food, obviously made with quality ingredients and old, traditional recipes.

Stará Sladovna is the old malthouse, that was actually used until 1860. Located right around the corner from Hotel U Sládka, this is where you eat if you have a half or whole pension. They have a variety of Chodovar beer on tap, which all tastes great with your food.

The second restaurant is Ve Skále, which when translated means ‘in the rock’, which literally describes this place. Located within the 800 year old cellars, you have the chance to dine in truly Gothic style. Ve Skále has a similar menu to Stará Sladovna, but just a different atmosphere.

Included in our package was the option of either a half or full pension, and we chose the half pension. The meals are only served in restaurant Stará Sladovna, and you choose from a certain menu. Each meal includes a soup, main course, and dessert. Drinks must be paid for separately. All the soups are thick and delicious. The best dishes that we tried were the duck, dumplings and cabbage, and chicken fried in beer batter. Both dishes were excellent. We also ordered a pasta dish, which was ok- but the pasta was overcooked. However, all portions are large. For dessert, they serve typical Czech things like pancakes, ginger cake, and kolac (which is a sort of cake/pastry), all of which were very good. The service in Stará Sladovna is fine too.

Chodova Plana is a quiet town on the Western edge of the Czech Republic. Host to one of the original beer spas functioning in conjunction with a brewery, there isn’t that much more to see or do than drink beer and spend time in the spa. There is a rather creepy abandoned chateau and a dilapidated Jewish cemetery, which gives the town a mysterious atmosphere. The area is surround by Slavkovský Les, which is a beautiful hilly forrest perfect for hiking and cycling in nice weather.

The small town of Chodová Planá is about 150 km. west of Prague, and only about 9 km. to Mariánské Lázně. Traveling by train can be difficult- direct train connections aren’t so often, and it takes about 4 hours. So, it might be best to go by bus, which only takes about 2.5 hours. Buses leave from Prague’s main bus station at Florenc. You can buy bus tickets at the main bus station, these tickets are usually cheaper than the train tickets. Bus tickets sell out quickly, especially on the weekends, so consider buying your tickets in advance. Chodová Planá is the next stop after the town Planá. You’ll get off at the only and main bus stop, which is directly in front of Hotel U Sládka. If you come by train, the train station is located about 10 minutes on foot from Hotel U Sládka, and located on the same (and main) road.

These are some of the different beers that Chodovar Brewery & Beer Spa had on tap on our visit.

Relax in a bubbling tub of Bernard’s acclaimed beer 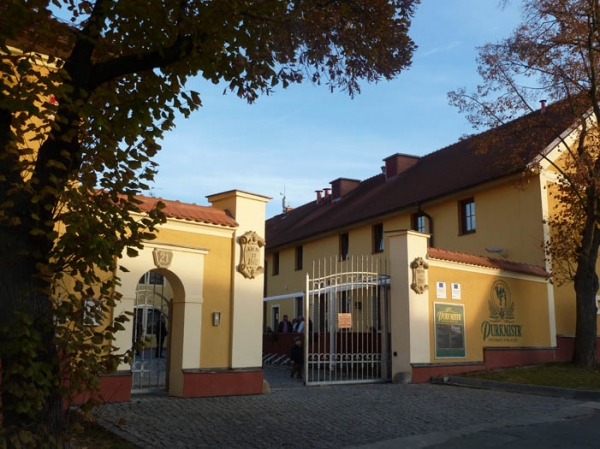